So much to update you all on! But that’s not what’s happening today. TODAY, I’m just popping in with this post that has been in my drafts folder for three years, because I just happened to reference our family rules in today’s Blessed is She devotion and awoke to a flurry of emails demanding (politely) to know ALL of our family rules.
So, here they are . . .

1. When People Give us Good Advice, We Listen.

This is the rule that reminds us that if someone else reminds us of the rules, we should listen to them. It’s weird and convoluted, but somehow necessary. 2. If You’re Doing It Really Hard You’re Probably Not Doing It Right

This one is a bit counter-intuitive, right? But I really think it’s true. In our family, it MOSTLY prevents children from Hulk-baby-ripping handles off of things by pulling them the exact wrong direction, or deciding to crowbar something open with a table knife, rather than, say, turning the lid. I think it applies more philosophically too, though. While there is a time and a place for great effort in the face of continued difficulties (like, say, math homework), in my own life, I’ve found that the things I was fighting the hardest to do were just not God’s plan for my life, and that when I cooperate with God, things go more smoothly. 3. How Could You Make Our Baby Happy?

x1000 per day. I’m all about challenging toddlers and little and big kids. I’m all about NOT being held hostages to their whims, demands, or preferences. But if the baby wants a thing, nine times out of ten, I say let him have it. And I say other kids have to let him have it. The fatal flaw in this rule is that at some point, the old baby will not be replace by a new baby and could end up completely insufferable. 4. Little Kids Do What Big Kids Tell Them

A big part of what makes our big family work is the enforcement of a hierarchy among the kids. We give the big kids authority over the little kids, and when the little kids don’t listen, the grownups back the big kids. If you want to be able to shower, or run a quick errand alone, or leave older siblings to babysit for the evening, enforcing a kid hierarchy is key. 5. Tyranny Will Not Be Tolerated

But of course, fallen natures and all that, the big kids will not always wield their power gently and graciously. This rule allows the little kids recourse if the big kids need reigning in. I love to see my kids laughing and chatting and hanging out. I just wish it didn’t happen almost exclusively when they were supposed to be doing the dishes. This one is probably the one that gets repeated most often, as a reminder of the preferred response when I ask/tell a kid something. Okay Mama is NOT their natural response. But the rule helps. 8. If a Toy Causes Unhappiness, it Goes Away

This is part of our policy that people are more important than things. Toys that cause fights, or tears, just Go Away in this house. I’m not going to referee turns. Either they can figure it out for themselves, or I have to get involved. And if I get involved, it goes away. Not for any set amount of time, I’ll just put it up on a high shelf, or take it to my closet, and then put it back in the playroom when I think of it. 9. What are YOU doing to help our family?

So, some of them aren’t “rules” so much as “things I say all day long.” Take this one for example. You’re probably going to hear this if you are, say, standing leaning against the counter while other folks are doing the dishes, or laying on the couch staring at the ceiling for no particular reason.

This is the rule that begat ALL the rules. My mother-in-law said this to her kids. And she says it to mine. And I say it to them too, if they ever have coats, which is almost never.

You guys already know this one. It has a whole blog post.

12. Whistling is an Outside Activity

This one isn’t the end of the world. But, we just find that the comfort of our home and the productivity of its occupants is increased by there not being ANY whistling inside the house. They can go outside and whistle all they please. I think it’s okay to insist upon a certain level of volume inside.

Kids don’t love getting assigned chores, right? Right. But, somehow, they DO love to rush off to do something I asked someone ELSE to do. Why? WHY? I don’t know. But having this rule keeps my kids from pushing, tripping, and elbowing past one another in their rush to do someone else’s job. They’re such weirdos.

14. Sit in a Seat That Someone Isn’t Sitting In

Another one that seems like it shouldn’t be necessary, yes? But it really, really is. There are enough seats on our couch for everyone to sit and watch a movie. There are enough chairs at our table for everyone to sit and eat dinner. But nothing looks better than a seat momentarily vacated by a sibling going to grab a drink. And maybe you’ve been bickering with that particular sibling all day, but NOW if you don’t get to sit next to him by squeezing into a spot that means you’re mostly sitting on top of your sister, you’ll JUST DIE. But then . . . so much unhappiness. So we have this rule.

15. Don’t Take Your Pants Off Without a Plan

And here it is . . . the rule that launched a couple dozen printables.

I think it’s good advice for kids and grownups alike, ya know?

We were getting a lot of: 1. Take pants off. 2. Realize you don’t have any pajamas in your drawer. 3. Kinda pull shirt down, come out to the living room where we have company over to alert mom to the pajama situation.

But NOW, we have a rule.

Acceptable plans around here include:

“1. Take off pants. 2. Use as floatation device.” But that last one only works if you happen to be wearing sailor pants.

16. What does God do to complainers?

He sends snakes to bite them.Really, I just love this one. I love it so much I wrote a blog post about it AND a reflection at Blessed is She about it. My kids know this one so well, that now I don’t even have to say it. I can just hiss and poke them with two fingers. And THEY KNOW.

So . . . Scissors: okay for cutting paper. Not okay for putting in your mouth to make your cheeks poke out funny. Oven mitt: okay for moving a hot pan. Not okay for having a puppet show. Rubber mulch: okay for walking on, or falling upon from a great height. Not okay for filling your pockets or winging at your sister.

This one is just tattling, disguised as not tattling.

We have a family rule that before you come to tell mom or dad, you must take up the issue with the person with whom you are having a problem. Or, if you see someone breaking a family rule, you’re to remind him and give him a chance to stop before you involve mom and dad.

But, unfortunately, that rule necessitated this rule, because a lot of the “reminders” ended up being shouted right past the offender, right to me.

This one has always been directed mostly at the one to three year old set. But I currently have a seven year old who is terribly offended at assistance of any kind and still needs reminders.

It is a fact of life that toddlers need help for many, many things. But most of them do NOT want that help. My toddlers all want to “do it aself.” That’s great. I love that. I’m a huge fan of encouraging independence, even in toddlers. But sometimes we just need the hand washing or unbuckling to happen this decade and there will need to be help. So, when the shrieking begins, I remind them of the preferred response.

20. Three times is the limit, for singin’ stuff, sayin’ stuff, and doin’ stuff.

Much like whoever makes The Fast and the Furious movies, my kids believe that if something was good once, it will be good fifteen times. But, I think WE can agree that that just isn’t true. Three times is plenty for that novelty song about a duck at a lemonade stand or that knock knock joke.

That’s two anti-tattling rules in this list. But, MAN do I hate tattling. So, there ya go.

Basically our rule is that the kids should make every effort to handle things amongst themselves. They are Team Kid and we are Team Grown Up, and they should be trying to take care of each other, and address problems between members of their team without involving us.

However, if it’s dangerous or destructive, I want to know about it.

I can’t abide shrieking. I just can. not. So, we don’t allow shrieks of anger or frustration or glee. You can BE angry or frustrated or gleeful, you just can’t scream about it.

So, if there is screaming, there is one warning, then there is a trip to the corner or the crib, depending on how old you are. It’s pretty effective . . . eventually. Even with really stubborn kids.

And, by popular demand, the Tierney Family Rules are now available in the Catholic All Year Digital Shop, as . . . The Complete Set of 22 Individual Square Images, like we have in our mudroom.
And here are the rules in action! 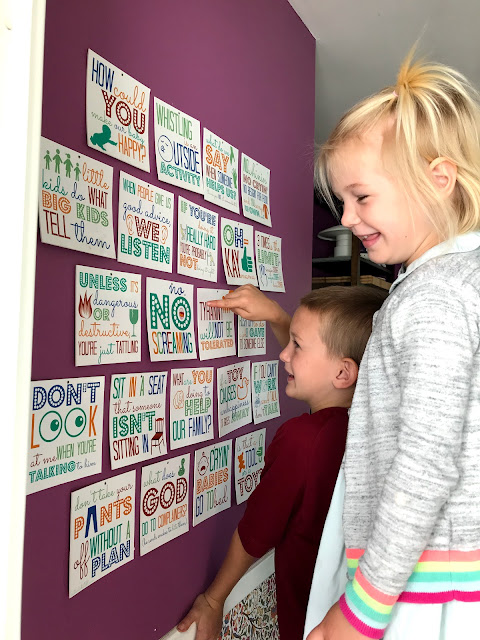 Amazon is being super weird about my book.

They have shipped from the printer. I have copies in hand. Ignatius has copies in stock and is shipping them out. I am assured by the folks at Ignatius that more than enough books to cover pre-orders should have arrived at Amazon warehouses. But, Amazon is saying 1-2 months delivery. I have no idea what’s going on. I have no control over it. But I really don’t think it’s true. It’s got to just be a glitch, and they’ll realize that they have the stock and ship them out this week. That’s what I think. Buy I’m not in charge of Amazon. If you want to cancel your Amazon pre-order and purchase the book from Ignatius, I’m sure Ignatius would be grateful, as Amazon pockets 40% of the list price.

And this deserves its own post, but the Fiat Conference was absolutely amazing, despite THUNDERSTORMS in Los Angeles! Thank you so much to our wonderful speakers, and vendors, and my tireless family and fellow organizers, and the amazing soul who generously donated a professional tent to be installed the night before the event. See you all next year! 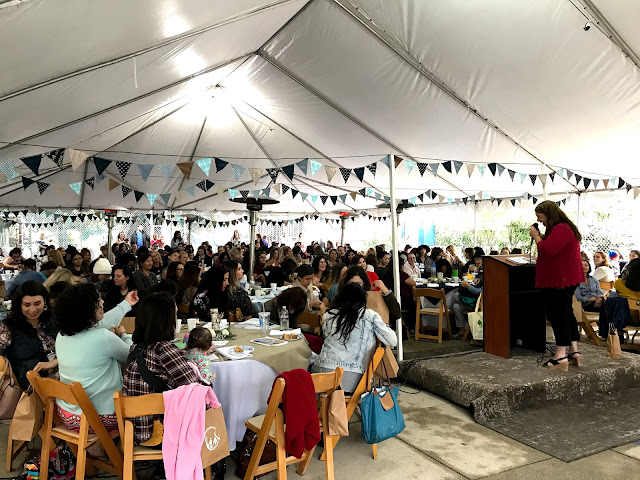 Finally, the 2019 Liturgical Year Wall Calendars are now available in two designs, you can order them here.