Why My Daughters Are Not Altar Servers

Mailbag time! A few weeks ago, I argued that learning traditional homemaking skills in an all-girl environment was beneficial for my girls. I’m back today to support something for just the boys . . .

I had a question about your kids and altar serving. I noticed that only
your boys are altar servers. I’m assuming that is because that’s what
your home parish allows, but out of curiosity, if you were members of a
parish that allowed girls to become altar servers, would you allow them?
Or stick to traditional custom of having altar boys?  Do your girls ever express interest in
altar serving, and if so, what do you tell them? 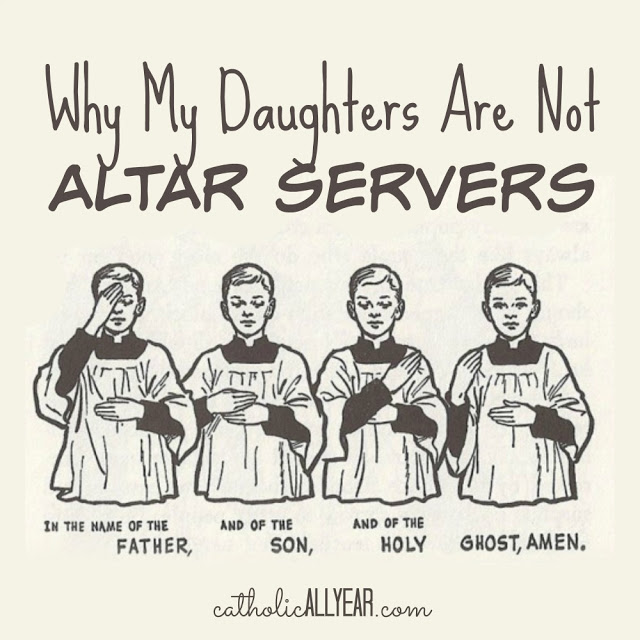 You’re right, my girls don’t altar serve. It isn’t the tradition at our
parish, but even if it were, it’s a privilege that I don’t mind reserving for boys.

Not because my girls wouldn’t do a good job, or wouldn’t enjoy it, but mostly just
because once women get involved in something, we tend to kind of take it
over, then boys and men don’t feel so obligated or interested in doing
it. Altar serving is something I want my boys to want to do, and to feel
pride about, and to feel necessary for. I hope it will help them respond if they have a vocation to the priesthood.

Female altar servers are allowed by canon law, but not required, or necessarily preferred . . .

From the point of view of liturgical law, an official interpretation of
Canon 230, Paragraph 2, of the Code of Canon law on the possibility of
delegating certain liturgical offices led to a 1994 letter from the
Congregation for Divine Worship and the Sacraments clarifying that girls
may serve at the altar. But bishops are not bound to permit them to do so,
nor could the episcopal conference limit the bishop’s faculty to decide
for himself.

A further clarifying letter published in 2001 said priests are not
compelled to have girls serve at the altar, even when their bishops grant
permission.

The 1994 letter states: “It will always be very appropriate to follow the
noble tradition of having boys serve at the altar. As is well known, this
has led to a reassuring development of priestly vocations. Thus the
obligation to support such groups of altar boys will always continue.”

The letter also recommends to bishops to consider “among other things the
sensibilities of the faithful, the reasons which would motivate such
permission and the different liturgical settings and congregations which
gather for the Holy Mass.”

Therefore the Holy See’s recommendation is to retain as far as possible
the custom of having only boys as servers. But it leaves to the bishop the
choice of permitting women and girls for a good reason and to the pastor
of each parish the decision as to whether to act on the bishop’s
permission.

Allowing girls to serve on the altar is a choice good Catholic pastors and families are free to make. I would not argue that this is a doctrinal issue. The fact that a pope who is now a saint approved of it, and it hasn’t been reversed by subsequent popes, shows that the Church doesn’t consider this issue to have serious doctrinal implications. I also wouldn’t argue that female altar servers pave the way for women’s ordination, since the magisterium has been very clear that women priests are not going to happen. Ever.

The papal declaration in “Ordinatio Sacerdotalis” that the
Church has no power to ordain women is no mere statement of opinion but,
as confirmed by the Congregation for the Doctrine of the Faith, an
exercise of the gift of infallibility and therefore binding.

But I just don’t find it necessary. In general, I am rather offended by the concept that in order
for a woman to be empowered, she must stop doing women’s things and do
men’s things instead. It’s a misunderstanding of our dignity as
women and our place in the world God created for men and women to share. I think what we’re really missing at most parishes is a good way for young women (and adult women) to be involved in a helpful and fulfilling way in the life of the parish, like the old altar societies. Let’s bring those back!

My mom is part of one that cleans and decorates the church, I’d love to see something like that as an option at more parishes.

We’re actually particularly lucky that our church is one of the historic California Missions, and has an active ladies’ organization that gives tours and whatnot, and also sells coffee and donuts after Mass. Betty is a (the) junior member of the group, and she really enjoys getting to sell donuts with the ladies after Mass. (I’m still wrangling too many little ones to participate, so it’s just Betty and the old ladies.)

Altar serving is a beautiful, meaningful thing. It is more beautiful and meaningful than selling donuts. But selling donuts IS fun and useful. Anything one does in such close proximity to the Holy Eucharist as altar servers are would have to be especially important. But serving the needs of the parish in other ways is still service, and that’s what I hope my kids will be concerned with: How they can be useful where they are needed, not how prominent or ceremonial the position might be.

If altar serving is a place to foster future priestly vocations,
and I hope it is, and if adolescent and teen-aged boys are more likely to want to participate if it’s an all-male endeavor, and I think they are, then it is something that I’m willing that my daughters would sacrifice a bit to protect. So, that’s how our family has chosen to handle it.