Are you a Catholic and a woman and a blogger? Do you want to come to my house and work on getting a little better at all three? Well, good news. We’re throwing a conference. Well, mostly I’m just hosting and giving a presentation on how to make Picmonkey images that might get your blog voted “Best Looking” in the Sheenazings. Other folks are doing the hard parts.
We have a lovely and helpful website, at which you can get all the fabulous details and register to attend. I’d love to see you there! If you’re coming, please say “hi” in the comments.
Click here to head over to the CWBN: California Conference site.

Probably you guys have already heard about this, what with all the mainstream media coverage and all <wink, wink> but I was named one of the . . . Because I have gray hair AND a blog, and I wrote a blog post about Why I’m Letting My Hair Go Gray. Also, I have a new haircut. But they didn’t know about that, so I don’t think it influenced their decision.

That picture is under fluorescent lights in the bathroom, so it does make my hair look more completely gray than it is. I think it still reads mostly brunette in the outdoors. But whenever I share an article about going gray someone will say that *I* can do it because I started out with light hair, so it makes it easier. To which I say, “Nuh uh!” This was me on my wedding day in 2001: brunette. It’s just been a slow and steady fourteen-year-long highlighting job.

Me (home from running errands with the girls): How did everything go?
Jack (12): Well, Frankie cried for a half an hour because his cracker
broke and I couldn’t put it back together. So . . . regular, I guess?

An interesting take by a philosopher on how schools are presenting fact
vs. opinion to kids. I like having smart people point out distinctions
like this, so I can be aware of how I’m presenting this concept to my
own kids . . .

Why Our Children Don’t Think There Are Moral Facts Children should not cut their own hair with nail scissors EVEN IF it is sticking up in the back. Fact, opinion, or both?

Another study to tuck in the “Important Parenting Stuff of Which to be Aware” file. Self-esteem good. Narcissism bad. Too Much Praise Can Turn Kids Into Narcissists, Study Suggests

Which kids were more likely to be narcissistic as time went by?
Parental overvaluation was the largest predictor of a child’s narcissism
over time, but interestingly, it did not predict self-esteem. In other
words, telling kids how exceptional they are doesn’t produce kids with
good healthy self-esteem – it just makes them more narcissistic.
“People with high self-esteem think they’re as good as others, whereas
narcissists think they’re better than others,” said co-author of the
study Brad Bushman. “Children believe it when their parents tell them
that they are more special than others. That may not be good for them or
for society.”

This was a link that caused some frustration when I shared it on Facebook, mostly from one guy who just seemed to be mad at Forbes Magazine and every person who reads it, but also from moms who wondered how we’re supposed to figure out how to walk that line between affirming our kids, but not giving them meaningless praise.

My friend Erin gave a great “how to” summary in the comments:

The ideal is to make comments about
how things are done rather than praise children for everything, even with
specific praise attached. For instance, instead of saying “what a
wonderful drawing” you say “I see how you
drew big green circles and short red lines.” It doesn’t sound
specifically like praise but it is, for young children because you’re
directly acknowledging what they did and not a non-specific item that
gives empty praise.

When you acknowledge what they do rather than just
praising, it gives an opportunity for the child to then elaborate on
what they did or are doing, creating an opportunity for a conversation
starter rather than a “you’re so amazing!” conversation ender (does that
make sense?). Something like “thank you for setting the table, that
really helps the family” is more ideal than “wow! You set the table
better than anyone else could!” (Which may sound ridiculous in writing,
but it’s a statement like that is commonly said by parents without even
thinking about it).

As the child ages what you say is different and
changes with them but the ideal is to not feel the need to praise
children for every thing they do because they learn to need the praise
and the extrinsic motivation for things. Many children will learn to say
“Do you like my drawing? How is my drawing?” And don’t feel accomplished
unless it’s been praised. The goal is to increase intrinsic motivation
so the child feels they are capable and good enough without the need for
outside praise. Not to say praise is a bad thing overall, but
meaningless praise that is constantly given is . . . meaningless.

There’s been a push in the
fields of child development and education to get rid of the “good job”
culture for 10+ years, it just takes MSM about that long to catch on to
concepts. Also, because it is so embedded into the culture, it’s difficult
to get rid of it – even for professionals who hear about it constantly
during professional development.

In our house, not creating entitled little narcissists is our goal. We
start by encouraging toughness, and gratitude, and discouraging
pickiness. I outline how we do it in this post:

Step two is teaching kids how to be actually useful and play a meaningful role in our home, by doing
real chores and doing them well. We also give older kids real responsibility and independence. I discussed that in this post:

Are Older Siblings Overburdened by Responsibilities? Or Are They Empowered by Them?

But the back and forth on that post was NOTHING compared to the confusion and outrage (and agreement and relief) inspired by this link:

Why you should stop giving your kid a bath every night

Especially coupled with my admission that . . . my preteens bathe if they’re smelly after sports, my little kids
every week (or even two) in the winter, and less often than that in the summer
because they’re in the pool every day. My babies bathe almost never. Until they
can sit up in the tub, I just kind of wipe them down as needed.

Good to know it’s all in the name of science.

According to Rob Dunn, professor of biology and author of The Wild Life of our Bodies,
the medical community has worked relentlessly (and well-meaningfully)
to remove as many microbes from our bodies as is possible without living
in a plastic bubble, and the overuse of antibiotics, antiseptics,
antihelminthics, and pesticides today has the potential to do our bodies
more harm than good. He goes on to say that overly clean living can be
bad for our immune systems, which need certain microbes and gut bacteria
to function properly and to keep us healthy from the more dangerous
pathogens.

According to the Facebook comments, some of you just. cannot. even. Which is okay. We each have hills we’re willing to die on. If daily baths for kids is yours, then have at it. Look at this picture, and then skip right on to take seven: But if you DON’T want to spend the time and resources to bathe your kids each night, know that I am right there with you, and it’s totally fine. (Maybe even better.)

St. Patrick’s Day is nearly upon us! 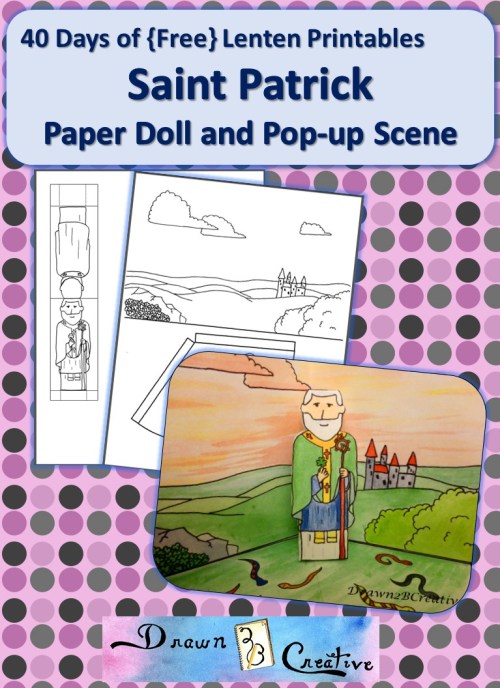 and I HAD to add it to my St. Patrick’s Day Tea Party Play Date post. SO cute. Look at the little
snakes!

There is still time to use the 50% off code if you’re thinking about ordering the St. Patrick CCC DVD. All the details on that are towards the bottom here.

Also since the Play Date first posted, I added a link to my Irish Songs of Drinking and Rebellion for Kids Spotify playlist a.k.a. Hooley at the Tierneys: the Soundtrack. And THAT has almost doubled in length with all the great suggestions I got in the comments.

I’ve gotten quite a few good recommendations for Irish movies in the comments on my Irish Movie Review post. But there was one comment that made me want to make an official clarification. There is a scene, a long scene, in The Quiet Man, in which John Wayne’s character (Sean) appears to be behaving in an abusive way towards his wife Mary Kate, played by Maureen O’Hara.

That scene is a trick
that Sean and Mary Kate are in on together, it’s HER plan, to get her
brother to pay the dowry he owes them. She pretends to run away, Sean
pretends to drag her back to her brother’s house to give her back to him
because, “No dowry, no marriage.” So the brother relents and gives Sean
the money, whereupon Mary Kate opens the furnace and Sean throws the
money in, and Mary Kate announces to the whole village that she’s going
home to make supper for her husband, and she does.

When she
opens up the furnace, we realize that she was in on it the whole time.
Because SHE was the one who cared about getting the dowry from her
brother, Sean never cared or wanted the money, but he went along with
Mary Kate’s plan because it was important to her that her brother
respect the customs of the time.

The 2015 Hooley is tomorrow! The RSVP count currently stand at 89 adults and 129 kids. The forecast is 89 degrees and windy. We’re going to need a lot of beverages. Wish you were here!

For more Quick Takes, visit Kelly at This Ain’t the Lyceum.