Righteous Anger Wasn't Working For Me

Living our faith is a learning process. It is our privilege and our responsibility to know and understand as much as possible about our Church.

But with great knowledge can come great frustration. I know, I’ve been there. As I lived my slow and steady reversion to my Catholic faith, I wanted to learn all the things. So, I read First Things and listened to Catholic Answers. I read many excellent books (this one is my favorite

) and listened to smart friends. It was great. It still is. I love learning the wisdom and traditions of this church.

So. What’s the right thing to do? I had a few options.

A. I could sit there in the pew and catalogue all the various liturgical abuses I saw.

I could keep a running tally in my head of everyone who was doing it wrong. I could focus on that instead of focusing on the Mass. Or on keeping my kids quiet/on the Mass.

B. I could try to fix the problems I saw by bringing them to the attention of the Pastor or the parish council.

I could get involved in the parish behind the scenes and try to change things from the inside. I could try to catechize my fellow Catholics directly.

C. I could go somewhere else.

If I don’t like how they are doing things at one parish, if I don’t like the leadership of a particular priest, I can take my time, talent, and treasure elsewhere. In every place I’ve ever lived, there have always been plenty of Catholic parishes from which to choose.

Stop me if you’ve heard this from me before, but I chose D. All of the above. I’m a both/and kinda gal.

A. This seems the least noble of the three options, for sure. But, really, there’s no way to un-ring that bell.

I know what we’re supposed to be doing. And I notice when we’re doing it wrong. I’m a pretty distractable person. I’m constantly ripping myself out of one thought or another to re-focus on the Mass. If it wasn’t all the hand holding during the Lord’s Prayer that was distracting me, it would be something else.

But what I’ve changed is what noticing a liturgical abuse does to me. It used to make me mad. Indignant. Righteously angry. 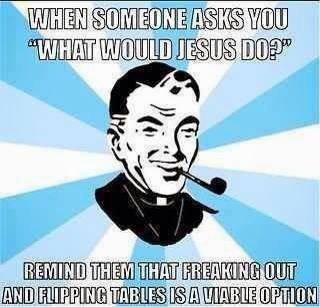 I know, I know, it worked for Jesus. But it wasn’t doing ME any good. So now, when I notice a liturgical abuse, I pray. I pray for that priest and for the generation of priests that were failed by our seminaries and our culture. I pray for the church ladies who lovingly sewed that ridiculous giant felt banner. I pray for the music directors, that they would be raised up on eagle’s wings, and be made to shine like the sun, if that’s what they want. And I pray for me, that God would give me the graces of the Mass, despite my failings of concentration.

B. We have stopped priests after Mass to mention something. We have written letters to pastors and even to the Bishop.

It seems like the thing to do, this one. But, really, we’ve never had much success with it. I’m not against it, by any means, and I’d do it again if it seemed necessary. But I’ve never seen it result in any changes at all. It’s just awfully impersonal.

The husband has served on the parish council. We have spoken at Confirmation and Baptism classes. And that . . . didn’t seem to do much good either. And was really time-consuming. Again, not against it, but again, we didn’t really notice results, even agitating from the inside.

What has worked better is genuine friendship. Befriending priests and seminarians, to support the ones who are doing it right, and be there to offer advice to those who might actually take it, has felt successful where even very well-crafted letters usually fail.

C. Sometimes, the best thing to do for all involved is to just move along.

It’s allowed. In Chicago this summer, after Frankie and I had our run-in with an unkind priest, I spoke with him at some length, and wrote to the Bishop, but ultimately we decided to attend Mass elsewhere. It was the right decision for us.

Back home in LA we are members of our local parish. We attend daily Mass there, and it’s where our children’s sacraments are recorded. But nearly two years ago, we decided to begin attending Sunday Masses at the Old Mission. It wasn’t a decision we took lightly, but our oldest son really wanted to be an altar boy, and, unfortunately, we just weren’t comfortable with him serving at a Mass the way it was being celebrated at our parish church. We are very, very happy fulfilling our Sunday obligation at the Mission. But we’re still a part of our neighborhood parish as well. So if they ever need to ask us for advice, we’ll be available.

But here’s the thing: the Mass.

The Mass is what’s important. I cannot allow myself to get angry, to have my peace disturbed by the accouterments. As long as it’s being said by a priest and there’s wheat bread and grape wine, it’s a valid Mass. Even if that priest is in MORTAL SIN. So we certainly don’t have to worry about the validity of the sacrament based on whether he washed his hands properly. Or if I liked the music. Or if babies were noisy.

If I let myself get all worked up about that stuff, that’s on me. Not on the priest or the music director or the church lady or the “Eucharistic minister” or the baby. That’s me. Me letting my emotions and preferences stand between me and the Mass, between me and grace, between me and God.

I can, and do, take any or all of the steps above to try to have the best experience of the Mass possible for myself and my family. But, now, I take those steps calmly, prayerfully, and charitably.

update: I found a post by Jimmy Akin that makes a similar point in a very scholarly way, with illustrative Bible stories
and everything. Check it out, Don’t Let Problems in the Church Steal Your Peace.