How to Teach Catholic Kids About Creation and Evolution

More from the mailbag! This time it’s a homeschooling faith vs reason question I received on the Catholic All Year Facebook page from reader Karen.

We are new to homeschooling and love your blog! We are starting our journey through the history of the world . . . we have found wonderful resources but I continue to struggle with how to teach creation in align with our Catholic faith. How old do we believe the world is? Do we think that creation really was over seven 24 hour days? And when really did those big dinosaurs roam the earth? How about the theory of the continental drift? What do I believe as a Catholic? Do you know of any text that address this at an elementary level? Our beloved pastor has told me that we as Catholics are free to believe good science as long as it is all from God. I know we did not just show up here. I get that, but still find some unanswered questions when attempting to teach it to our children. Any possible resources would be much appreciated. I do have the catechism and have read the section on creation. Thanks! 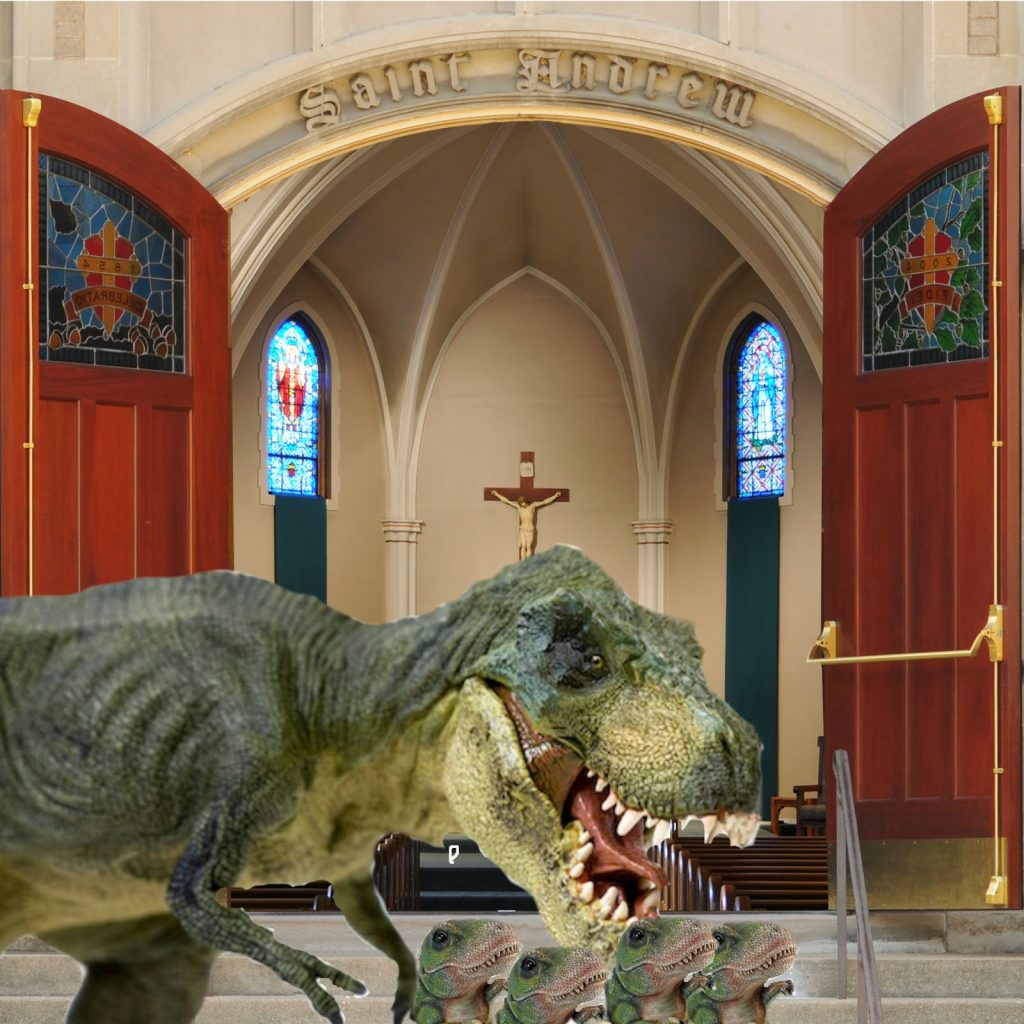 Hey Karen, I went through this EXACT SAME THING when I first started homeschooling my oldest son. He’s really into science, so it came up early. I didn’t know the Catholic teaching about creation either, I just had this vague sense that “Christians think evolution is bad.”

When I did finally look into it, it made me so proud of our rich Catholic faith that loves both faith and reason, both religion and science. Some of the greatest scientists in history (including Father Georges Lemaître, who first proposed the Big Bang theory) have been devout Catholic priests. And it’s not just history.

Some (not all) Protestant Christians have painted themselves into a corner with the sola scriptura thing and can’t believe anything that isn’t literally in the Bible. That’s not how we view it. We view the Bible as, not a book, but a whole library, full of different genres, some of which are meant to be taken literally, and some of which are not. So we Catholics have the freedom and confidence to follow scientific exploration wherever it leads us.

We aren’t scared of science because we know that good science is the pursuit of truth and ALL truth leads to God.

So, what does that mean for kindergartners? Well, mostly, that Adam and Eve were real people created by God, and that we are all descended from them. God made all creatures and all creation, but we don’t know exactly how, or on exactly what timeline. It’s possible that it happened exactly how it is in Genesis, but that doesn’t look like the most likely explanation now. And we are truth seekers, so we want to know the truth and that will point to God.

It looks like there has been evolution, at least on a small scale, and that just means that was God’s plan, and how he decided to make things work. The truth of large scale evolution, where one species turns into another is less clear. Could be true, could not be true, we just don’t know yet. IF (big if) someone were ever to prove that humans were descended from apes somehow, it would mean that Adam and Eve were the first to be truly human, and the first to be endowed by God with immortal souls.

Fortunately, homeschooling moms do NOT have to have all of the answers. Sometimes it’s good enough to just have the right questions.

I hope this helps, and I hope you’ll encourage your little scholars to love science and truth. We need a new generation of faithful Catholic scientists to help us sort all this out! Catholic Answers is a really good resource for more detailed answers to Catholic science issues. I’ve never found a Catholic science book I like for younger grades. We use Mother of Divine Grace, and Mother of Divine Grace uses Abeka, which is Protestant, but it’s fine, as long as YOU know how to steer particular conversations.

Kendra
Here is some related reading . . .

WHAT IS UP WITH OLD TESTAMENT GOD?

HOW TO TALK TO LITTLE KIDS ABOUT THE CRUCIFIXION And now it’s YOUR turn. Any one know of any good resources for Karen?
Disclaimer: I am not a theologian, nor am I an official spokesperson for the Catholic Church. (You’re thinking of this guy.) If you read anything on this blog that is contrary to Church teaching, please consider it my error (and let me know!). I’m not a doctor or a child psychologist or an expert on anything in particular. I’m just one person with a lot of experience parenting little kids and a desire to share my joy in marriage, mothering, and my faith.