Hey all, while we’re out of town for Easter Break, I’m cleaning out my drafts folder.  So if this sounds like it was written a while ago, it probably was.  I’ll still be checking comments, so feel free to have an opinion.  And a very happy Easter to you and yours!


In case you missed it the first time around, here is my original review of Percy Jackson and the Lightning Thief.

Thanks to some astute commenters and my fabulous mother-in-law, (battle-tested by many years of teaching English at an all-boys high school), AND the very smart moms and big kids at our parkday, I feel I should clarify a couple of things:

I think the reason that my review comes across as awfully negative for a book that’s really not THAT bad is because I felt  blindsided by what the book really was because of the universally positive reviews I had read.

While this book celebrates and rewards the immoral behavior of its characters (especially Percy’s mom), all the immorality happens off-screen.  So, no one will be traumatized by that aspect.  And certainly this book could be read by kids with some guidance.

I did my homework, read the reviews, and thought I had found a book I could just hand to my kid and walk away.  But I discovered when I read it for myself (mostly just out of curiosity, since I THOUGHT I had properly vetted it) that it brought up troubling moral issues that I was very grateful that I was aware of so that I could discuss them with my son.

So the real lesson for me is that I can’t trust other parents to do my job for me.  Knowing that, I’m left with the option to:

I think part of being a homeschooling family is that conscious choice we’ve made to live our lives together, all up in each other’s business.  That’s the beauty of it.  We have the time and the freedom to read books aloud as a family.  And stop and discuss them.

When I’m in the car, it’s most often with all the kids along, so we can listen to audio books together.  And stop and discuss them.

Our TV viewing area is very centrally located in the house, so what one person sees, everyone sees.  I don’t allow my kids to watch movies or TV shows that I find morally objectionable or just dumb.  I am trying to protect their moral integrity AND cultivate their taste, so that they will know and appreciate real truth and real beauty AND real comedy.  Comedy more subtle than bubbles in the bathtub or a wiffle bat to the crotch.  And I want them to recognize when a show is JUST TOTALLY LAME and not like it because of its lameness.

So, my desire is to read, watch, and listen to everything that my kids read, watch, and listen to because we are a family.  And we are able to share a lot of entertainment.  But with this many people who love to read AND watch TV and movies, it’s not possible to supervise all consumption of entertainment.  Especially when you factor in time spent out of sight.  But if I can make my kids discerning consumers, I don’t have to look over their shoulders at all times. 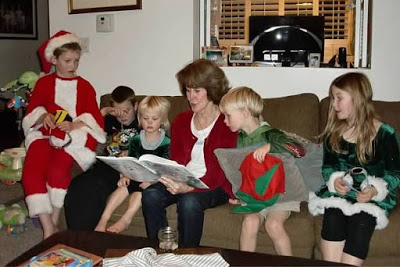 So, how do we do it?  The first step is by introducing the concept of an “agenda.”  It sounds sinister, doesn’t it?  But everyone who creates something does it with some sort of purpose.  I have an agenda writing this blog.  (I’ll leave it to you to figure out what it is . . . )  I tell my kids that the creators of books and movies and TV shows are trying to convince them of something.  The trick is to figure out what it is, then decide if you agree with it.

The second step is to model discerning consumption of entertainment.  When we read books aloud, we stop and ask questions and discuss issues.  When we watch movies and TV shows we pause them for the same reason.  We expect our kids to participate actively in their entertainment and think about what they are seeing and hearing.  The husband and I also often discuss books and movies that the kids haven’t seen in the car or over a meal.  The kids get to see how we decide what we think about something, even if they didn’t get to see the real thing.

A big part of this concept is knowing when to talk it over and when to turn off the TV or close the book for good.  A well-done movie with a problematic point or two (The Princess and the Frog, for instance), means we’ll pause it and talk about it.  But there are movies that are well-liked and made for kids that I just don’t think are appropriate for us.  Watching Elf, for instance, would require me to introduce the concepts of out-of-wedlock births and lingerie.  I have not so far felt that my holiday would be improved by such a discussion, so we don’t watch that one.

A show that means well, but is just poorly executed (sorry, cartoons on EWTN) doesn’t get to stay on in this house.  Ain’t nobody (around here anyway) got time for that.  And I can’t imagine letting my kids watch those terrible Disney Channel kid-sitcoms.  In addition to promoting inappropriate behavior, they are dumb. I just wish someone would’ve told me before I wasted so much of my childhood thinking Saved by the Bell was astute and hilarious.

The third step is to make them decide what they think about something.  My little kids’ default opinion about every piece of entertainment is that they like it.  Why?  They don’t know.  They just do.  But I want them to know for sure if they like something, and why or why not.  I ask them about things we read or watch together.  I see if they can identify the creator’s agenda.  Even if they see a movie or read a book without me, I ask them questions about it.  That way they are forced to develop the ability to have an informed opinion about things.  (As you may have noticed, I’m a big fan of having informed opinions on stuff.)

And my hope is that, as they grow and have more experiences that I am not a part of, and have the responsibility to choose their own entertainment, they will be less likely to be unknowingly swayed by someone else’s agenda.