Back in January, when I started this here blog, I hooked it up to Amazon Associates. That means that when you click on a link from the blog that takes you to Amazon, then you buy something, I get a teeny, tiny percentage of what you spend.

Now, as someone who hasn’t been in the workforce for almost exactly eleven years, I was a bit giddy about the idea of an income.

I decided I wanted to save up for something that we probably wouldn’t normally splurge on, and that would be useful to my life as a mom AND as a blogger.

A new camera was the obvious choice.  One that would take good pictures for the blog of my children.  Buuuuuuut . . . I’ve never been super-good at waiting.  And my old camera was really not cutting it.  So the husband took pity on me and we bought a better camera before our Italy trip.

Which left me with literally DOZENS of dollars at Amazon burning a hole in my virtual pocket.  I did NOT want to spend it on school books.

this giant octopus sticker for the kids’ bathtub.  I’m so proud. Plus, look how cute it looks with the existing bathmat.

The kids love it, and now it’s one of my quick takes on the blog, so that’s how I’m spinning my earlier requirements.   Want one of your own?  Go here.
Seriously, do it.  I will make like nine cents.

I finished all the “Classic” Doctor Who episodes on Netflix, and I have to say, I think they’re playing it fast and loose with the word “classic” over there.

The Fourth Doctor was my favorite of the bunch and the kids did like his episodes.  I didn’t mind the Fifth Doctor himself, but I found his companions pretty insufferable.

There are a TON of episodes of this show, and Netflix’s collection jumps around and skips a lot of them.  On the one hand, thank goodness, because I don’t think I could’ve handled any more.  But on the other hand, the whole reason I was watching was to better understand the new Doctor Who episodes and the episodes they offered jumped around so much that I never knew who his companions were or where they came from or what their deals were or why he didn’t just let those aliens eat them because golly were they ever annoying.
So if you like the Doctor Who reboot and really want to understand the backstory, may I suggest Wikipedia instead of Netflix?
— 3 —

So I am moving on from Doctor Who, until Season 7 makes it to streaming anyway.  But at least I’ll have these super-awesome shoes to keep my spirits up until then: How cute are they?  I got them from etsy.  People compliment me on them all the time, without even noticing that they are awesomely nerdy, since they also have a cool color-block eighties vibe to them.
— 4 —

So what to do now that I’m not watching Doctor Who?  Watch Sherlock of course. I am a big fan of Sir Arthur Conan Doyle’s Sherlock Holmes stories and I thought Season 1 (which is all I’ve finished so far) did a near-perfect job of presenting authentic versions of the characters transplanted into modern times.

What little I’ve seen of the older versions of Sherlock Holmes in film and TV always bugged me, because that staid, straight-laced guy just isn’t representative of the character I read about in the books. 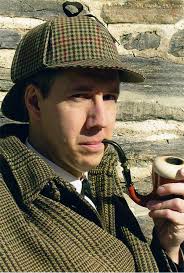 I was actually pretty pleased with the recent films, since Robert Downey Jr’s version of the character is so much tougher than the tweedy guy.  And so much more faithful to the Sherlock Holmes of the books, who boxes and uses recreational drugs and exasperates Watson. But still, he doesn’t LOOK like Sherlock Holmes — who is described as “rather over six feet” tall and “so excessively lean that he seemed to be considerably taller.” He’s also meant to have a “cat-like love of personal cleanliness.”  None of this describes Robert Downey Jr.

It DOES describe Benedict Cumberbatch: I think he’s perfect in the role.  Perfect.  I also love the music and I think the opening credits are brilliant.  They make actual time-lapse shots of London look like a toy train set, which must be how it all looks to Sherlock Holmes everyday.

But it’s not all bathroom redecorating and Netflix streaming around here.  No, sometimes people invite us over to their houses for adventures.  People who have blogs, and epic love stories, and keep bees.

Yes, our friends the Rhodes family invited us over for a honey harvest last weekend.  It was amazing.  The kids are still talking about it in honey-for-breakfast-fueled outbursts of excitement.

The bee hat was quite popular: Jack actually got to help Jacob with the harvest, while the rest of us stayed back a safe distance.  It was evening, though, and the bees didn’t seem interested in us at all. After they were done harvesting they brought all the honeycomb inside in a giant bucket and we all got to munch on some.  Delicious! We took turns smashing up the wax to release the honey, then it got hung up to strain into a bowl through some cheesecloth. And now those two jars of honey (plus one more) live at our house.  Thanks for the memories Rhodeses!  We’ll miss you.  Our loss is Austin’s gain.

I have wreaked my own tiny bit of havoc in my corner of the blogging world with my movie reviews of late.  I disagreed with Bonnie’s take on Silver Linings Playbook, then Jessica thought my  review of Skyfall was way off.

I find it very interesting that people with (I’ll go out on a limb here and say) identical values can come to such different conclusions about the same films.

— 7 —
And THAT is textbook how to jinx yourself, everyone.

I wrote that on Tuesday.  Then on Wednesday I received a comment from — you guessed it — Anonymous on my highly controversial post in support of butter.  The commenter suggested that I am a total jerk who leaves nasty comments on other people’s blogs and probably has Aspergers.  S/he also quoted from a comment I had left on another blog (in which I was being perfectly pleasant, by the way), so I knew it wasn’t just a random spammer.  It was someone who actually wanted to stop by my blog and say something cruel to me personally.

It made me think of Grace’s recent post in which she tells of the reader who sent her an email detailing all the instances on the blog in which Grace’s children have gotten into mischief on her watch.  Grace gets called a bad mom.  And of my friend Monica, who got a nasty comment on a guest post she wrote basically calling her a sell-out for offering Catholic themed products for sale on a Catholic website.

Grace is a funny writer and a great mother.  Monica is a talented crafter with products that make the lives of Catholics better.  But that didn’t stop either one of them from being bruised by some stranger with a keyboard.

And how do these commenters know exactly how to get you where it hurts?  If I had gotten Grace’s or Monica’s comment, maybe I could have just said “Eh, s/he’s crazy.” Because I feel pretty good about my mothering and I have nothing people want to buy, so I couldn’t possibly sell out (unlike Monica who has lovely things to sell which everyone should go buy).  But the idea that I would come across as “insulting, critical, holier-than-thou, and arrogant” is terrifying to me.

It fed my fears that comments that I intended as clever or funny or helpful are being interpreted as all those terrible things above.

To the best of my knowledge, what the commenter said is totally untrue.  (Please let me know if it is true, but maybe privately and with your name attached and without any medical advice.)  But that didn’t stop it from messing with me all day.

Who IS this person?  Why would they bother to dislike me so much?  Clearly I’m new to blogging and overthinking this.

It took me a while to delete it, thinking that it was poor sportsmanship to delete comments that disagree with me.  But fortunately I’m Facebook friends with awesome bloggers like Jenny, Julie, Coco, Elizabeth, Monica and (indirectly) Bonnie.  So I got over myself and deleted it, as I would have done immediately for any comment on my blog that disparaged anyone else.  Plus, it was totally off-topic!

Frankly, I’m having a doozy of a time trying to make a good excuse for it.  It’s pretty unfathomable to me.  But I shall keep trying.  In the meantime, I am reminding myself that most people have to deal with unpleasant people.  The husband has a job in which that’s an almost daily occurrence.  I live in a sheltered bubble of nice Catholic moms who are always sweet and almost always agree with each other anyway.

So I’ll try to toughen up a bit, comfortable in the knowledge that I can always disable anonymous comments.  I have that power.

But I will also add him or her to my prayer list along side all the people who don’t think I should bring my babies to Mass (here too) and the two little old ladies who pickpocketed me at Fatima.  I have that power too . . . to allow God to turn unpleasantness into grace.

I’m keepin’ it real Psalm 40 style:
I waited patiently for the Lord;
he inclined to me and heard my cry.
He drew me up from the desolate pit,
out of the miry bog,
and set my feet upon a rock,
making my steps secure.
He put a new song in my mouth,
a song of praise to our God.
Many will see and fear,
and put their trust in the Lord.
For more Quick Takes, visit Conversion Diary!