Today was radiation day!  I got to use a new emoji combo in a lot of messages today.

Not everyone gets to use this combination every day, so I felt pretty good about it.

To start the day off right we had a Mass in our house, in the amazing chapel that Kendra created from nothing.  It was really beautiful, and Kendra broadcast it on Instagram live.  If you missed it, the video is available on YouTube now. 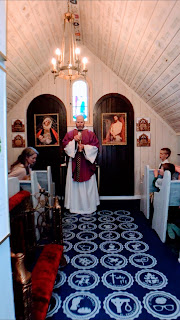 Over three thousand people joined us online, including someone from Switzerland.  We were very touched at the extent of the support.  The scripture quote above was from today’s responsorial Psalm, and it struck me as perfect.

When I went to UCLA, we got some new information:

Okay, so informed, Kendra and I headed over to begin the treatment.  The technicians were nice and friendly in ways that kept the mood very light.  They showed us to the control room and introduced us to the whole team, which was a nice touch that they didn’t have to do.  The room was reminiscent of a Navy ship control room.  Dark, many buttons, designed to look like what movie set designers in 1963 thought state of the art computers were going to look like in 1978.

The appearance didn’t bother me.  I’ve seen the rooms where the Navy runs nuclear reactors and jams enemy radar and finds other submarines, and know that it’s both the tool and the operator that get the job done.  Our technicians instilled a lot of confidence.

Then we went to the treatment room, and the radiation machine was clearly very modern.  The technicians explained to me that I could choose my music, which I declined, thinking I didn’t care.  The technician was great and warmed Kendra’s heart especially when he didn’t give up and offered that he could just sing for me.  It was very charming and made it a little lighter still.
They got me strapped in to the mask affixed to the table pretty quickly.  Kendra took a photo or two and had to leave to wait in the waiting room.
The mask had hardened even further since I was fitted for it, and it was snug.  It forces your jaw shut, so you’re not going to want to attempt this with a stuffy nose.  So far, so good, and it wasn’t especially uncomfortable.  The technicians exited the room and things got started pretty quickly.
The table and several parts of the machine all move around to optimize the position and get the particle beams pointed right where they’re supposed to go.  The treatment lasted about an hour, which was longer than Kendra and I had thought it would – we both seemed to remember hearing about 30 minutes.  It seemed that a lot of the hour was spent positioning me and perhaps even doing practice runs.  They didn’t tell me when the radiation was coming – probably better so you don’t flinch or get in your own head – and there are all sorts of different sounds coming from the machine and the room, any of which could have been the initiation of the radiation, I guess.  Or maybe there’s no noise associated with the radiation.  Not my area of expertise.
About mid-way through, the music took a weird turn and I had about 10 minutes of some avant-garde compositions that are probably just best described as “noises.”  I think I’ll pick the music next time.  I’ve got the weekend to think about it.  The number one recommendation at the dinner table tonight was “Sea Shanties.”  I once had an Uber driver in Portland who was big into Sea Shanties, and the kids have always thought that was hilarious.
As the hour wore on, the mask became…somewhat less pleasant to deal with.  Having my head pinned to the back of the mask got to be downright painful to the back of my head after a while.  When I was going through Cancer 1.0, a friend told me that whenever you have physical pain, you put yourself in the shoes of Simon of Cyrene.  This was working for me because it wasn’t hard to imagine supporting a healthy portion of the weight of the Cross with the back of my head in this moment.  I offered up a lot of prayers for all of your intentions during the second half-hour.  Family, you got a lot.  Intentions you’ve left in comments, you got a lot.  People who are looking for jobs, you got a lot.  Colleagues got a lot.  Lots of other people, too.  The nice thing about this technique, I’ll say, is that it’s just a great way to feel like you’re getting some value out of what might otherwise feel like meaningless suffering.
Story about that:  I wish someone had told me the Simon of Cyrene thing many years earlier.  I’m embarrassed to say I was kind of a grumbler when I went through Marine Officer Candidate School, and man, what a lot of missed opportunities there.  The one that comes to mind the most is this crazy miles-long obstacle course you go through as a team while carrying a log, getting it over, through and under obstacles, by the way. 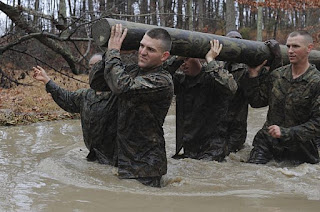 Here’s the thing about carrying logs with a team: you don’t want to be the two tallest guys unless you’re looking for some Simon of Cyrene opportunities.  Back then I was not.  I was looking to get through without being noticed.  This just in: that’s not possible when you’re the tallest guy, wear glasses (“Get over here, Portholes!”), they find out you go to Harvard, and you look like it (clammy, library level of skin coloration, look like you didn’t have time to eat last semester).  So I was disabused of that hope of anonymity within 6 minutes of arriving and settled in to catching the level of harassment one would expect such a misfit to attract.  Okay, harassment – fine.  But the log.  The two tallest guys (6’4″ and 6’3″) in the squad of 12 carry the log.  Everyone else?  They’re 5’6″ and do not carry the log.  They trot along under the log and “encourage” Harvard Portholes and the 6’3″ one to do a better job carrying the log.  Their hands are on the log, but it’s way up there, and if they ran for miles pushing forcefully upward on that log, they would be way too winded to shout “encouragement” to Harvard Portholes.  And we gotta beat that other squad – hey, why are all of them exactly 5’11” anyway?  I’m mocking myself here, team, and I needed to just be a better Simon of Cyrene.  It’s a life regret I have.
In addition to thinking about the log at OCS while radiation was going on, I was trying to think about whether I could tell when the tumors were getting zapped.  Was that a slight pain in my brain I just noticed?  Is that a tumor getting fried?  In the end, I don’t think I really noticed anything.
When they came in to let me out, I left my head in the mask 1 second longer than I needed to – on purpose – because of the log regret.  I decided to call it even.  I walked out feeling totally normal and met Kendra in the waiting area.  Her first comment was that it had taken an hour, which seemed to have worried her, not knowing what was taking so long.
We went over and had lunch at the UCLA hospital cafeteria, which is the best one I’ve ever been to – and I’ve been to a lot, what with all these babies.  We had a nice meal and got to talk, and shared some memories.  Weekday lunch dates with a spouse come so infrequently that I was just really grateful for the opportunity.  We reminisced about how we used to have them when I was in business school.  Stanford had a crazy sort-of closet/abandoned classroom in a basement of a classroom building that served Thai food out of the door.
There was a huge line every day, and while there was a menu, the norm was to just quickly order the day’s special – and the day-to-day variation on spiciness was huge and totally unpredictable – and move along.  The place was commonly called the Thai Cafe by the students but there was no name posted anywhere I could see.  And this was not a cafe.  It was an unused room with some kitchen equipment thrust in there and a lady slinging paper plates of food out a door.  After paying, you scrambled to find some room to sit on a curb or part of a building that had a horizontal wall at the right height while you tried to shovel the food down before you realized today’s batch was too spicy for consumption.  Not a cafe.  It was one of our favorite things to do in our first two years of marriage.  Thank you, radiation, for bringing back a really cherished memory of our lives from light years ago, even before kids.
Lastly, I drove us home.  Kendra offered, but c’mon, they told me I’d be able to drive home.  I gotta try this.  I felt completely fine from the moment I exited the mask and am still feeling great as of press time.
Kendra was wiped out when we got home, so I dropped her off and headed down the street to the church.  Wanted to give thanks and pray.  The last few times I’ve stopped in this church, it’s been empty and I’ve taken to an out-loud conversation, leveling with God about my view of this situation.  There are a few Catholic saints who were known for doing this (St. John Paul II and St. Josemaria Escriva are two I’ve read about specifically), so I figured I needed to try it.  I’m going to give it the Harvard Portholes seal of approval.  I felt some big barriers being dropped.
Next up: radiation session 2 is 4:10pm PDT Monday.  Session 3 is 8:50am PDT Tuesday.  After that they give me a break for some amount of time, not sure how long, before starting the next drug.
This was a good day – a really good day.  Thanks to all of you for your prayers and support.  We got a huge number of messages and emails today, not to mention all the people who tuned in for the Mass, many of whom sent prayers and comments.  It’s great to have all of you on my side.
With fortitude and prayers for you,
Jim