Good news and other news It’s been a while, so it’s time for an update.  On the cancer front, these last 4 months have brought a lot of good news.

First, since I had a second round of brain radiation in early December, I’ve had two rounds of brain scans that indicate no new tumor growth.  Great news! 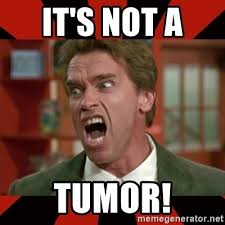 Also, I had a chest scan that indicated further shrinkage in the main lung tumor they watch.  That tumor has done nothing but shrink since Cancer 2.0 kicked off almost 2 years ago.  I’ve actually forgotten how many times I’ve gotten results that indicated that that or one of the other lung / chest tumors has shrunk.  So, great news there, too.

And on to the other news of this update.  It turns out that sometimes the clinical story of cancer is about more than just cancer.  Apparently, when they radiate parts of your brain with a photon beam to kill tumors, other stuff happens sometimes.  While all the brain tumors have disappeared from the brain scans or appear to be dead (highly desirable!) there is some swelling around one of the dead tumors (not desirable).  They put me on a steroid to try to bring the swelling down (side effects of difficulty sleeping, huge appetite, and irritability), but that hasn’t done the trick.  The two scans that have confirmed that there are no new tumors also show increasing swelling around one of the tumors.  Time to get that taken care of.

Thinking about this from a bragging rights perspective, which I am, I wanted the laser.  The doctors took that from me though, saying they ending up concluding it “wouldn’t be effective” and “was not the appropriate therapy” or some medical mumbo jumbo like that.  Whatever.
They also laid out the risks of brain surgery, but they were probably overestimating my desire for bragging rights at all costs.  Didn’t take much explaining about half millimeters to think the drug was a good call. So this week I go on a new drug to bring down the swelling and that can also kill cancer cells. 98% of people have no side effects on this drug, so I will most likely continue to get off easy.  I have no plans to slow down, and in fact, working in healthcare as I do, it’s been like living in a 24/7 emergency lately.  I’m working as hard as ever and actually spend most days out of the house.  One doesn’t want to be a 2-percenter with this drug, though.  The side effects are serious for that group.   This medication is chemotherapy, which is the first time I’ve done that in all the 13 years of Cancer 1.0 & 2.0.  That being said, the low incidence of side effects is yet another example of why this is such an amazing time to be alive.  I feel very good about this next move.
All the while, we – like everyone else – have been living through this worldwide COVID-19 lockdown.  I am not going to spend a lot of time on that here.  It has gone fine for us.  Our 4 oldest kids had been homeschooled for years, and so the transition back into that environment has been easier for us than I’m guessing it has been for most.  Kendra asked our oldest, Jack (who is now missing the end of his senior year in high school) how he was handling it.  He said, “It’s great.  It’s like summer vacation, except there’s school.  And you’re grounded.  And it’s Lent.”  That’s the spirit, Jack!
I put out an episode of The Dad Project Podcast about thriving as a dad during the lockdown.  You can also find it on the iOS, Spotify, SoundCloud, and Google Play podcast apps.  Hope it helps some dads out there.
Okay, that’s it for the update.  We appreciate your continued prayers and pray for you daily.
With fortitude and prayers for you,
Jim